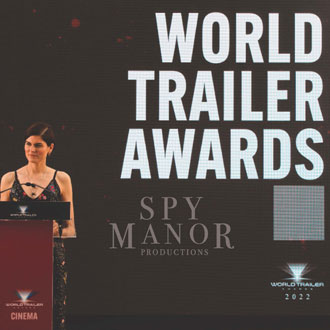 Vilamoura is centre stage at the inaugural awards ceremony.

Peter Ogunsalu of Spy Manor Productions has been in discussions with Evelyn Brady-Watters, Cofounder
of the 21-year-old GTA’s Golden Trailer Awards, to launch the World Trailer Awards for some
time. We were thrilled when finally, after some tough, established competition, we managed to bring
the first-ever WTA to the stunning Algarve.

We are pleased to announce the winners of the 2022 edition of the World Trailer Awards, which took
place at the Tivoli Vilamoura Marina on Saturday the 26th of February. We were fortunate to have the
outstanding Portuguese actor Sónia Balacó as the presenter for the whole ceremony.

The Regional Winners were selected by a high profile international jury that consisted of top-level
directors, producers, actors, writers, executives and advertising creatives.