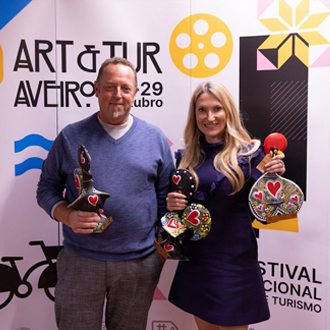 Then in the International Competition – Innovation in Tourism – 1st prize and finally – Arts & Creativity 2nd prize.

Earlier this year, they were thrilled to learn that they had been shortlisted as a nominee in the 14th edition of the ART&TUR – International Tourism Film Festival in Aveiro and said that they never expected to win five awards in total.

The nominated production was for their promotional video Sky Base One which tells the story of a movie inspired villa that is now being built in Carvoeiro. The inspiration behind the villa’s design is based on a very famous spaceship from one of the best sci-fi movies ever. The designer villa appears to have made a gentle crash-landing onto the Seaview plot in Lagoa.